Stepping back in time through our own current realm is a fantasy by which many of us wish to explore. However, how would we as humans of the 21st century interact with those of another time period who follow different cultural frameworks? Would we impose ourselves or respect their boundaries? To complicate this scenario, what if the individuals in the fantasy worlds are not real human beings? “Westworld”, a sci-fi Western directed by Michael Crichton in 1973, delves into these issues wholeheartedly which are highly applicable to our nature as human beings.

Delos is a company which offers three different travel destinations – Medieval World, Roman World, or Westworld. Guests can travel to either world and engage in whatever activity their heart desires. This could be gunslinging, jousting, or engaging in private relations with the hosts (robots who are eerily human-like designed by Delos to inhabit the fantasy worlds). While guests can harm or kill the hosts, the same cannot be said for the latter. Many hosts are repaired on a nightly basis so that guests can indulge in said fantasies during the day. However, an issue arises when a malfunction in the software in each location occurs whereby hosts veer from their programming to refuse guests’ wishes, even harming them.  Yul Brynner convincingly plays a robot gunslinger, who is one of the many robots who aim to exact vengeance on guests who have previously exploited him.

I find the concept of this universe extremely thought-provoking, as well as a startling commentary on humanity. First of all, a class discrepancy existed between the hosts and guests. The hosts and their employer were paid to serve the needs of the upper class guests, which at times were very demoralizing. It was disturbing to watch guests take advantage of fair maiden robots, liberally killing hosts, and enjoying the process while being subliminally influenced by the travel agency in their decisions. This raises the question of the true nature behind humans’ drives and intentions. As well, I feel that another dimension to the film’s interpretation lies in addressing the dissatisfaction of human existence. The guests spend thousands of dollars immersing themselves in a world in which they will never belong, and hope to rid themselves of a lack of control in their daily lives by exerting power onto subordinate guests. While the technology in the film is dated by today’s standards, these ideas are quite pertinent to current tones in society.

This film has been rediscovered thanks to HBO’s acclaimed and highly fine-tuned series. There is a wealth of material to elaborate on for this series, and these themes and the layers of this universe will continue to be carefully unearthed and examined by viewers. 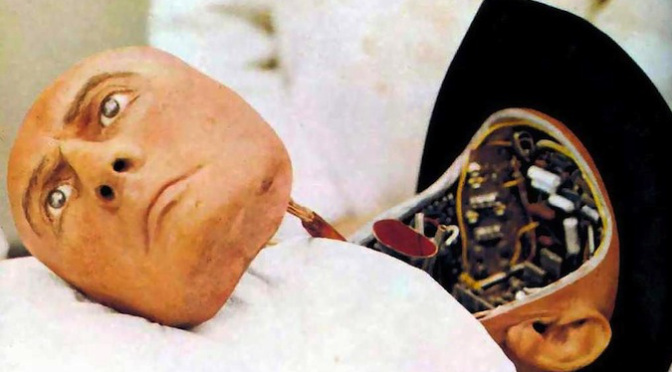