The expedition that individuals take throughout the course of their time on Earth can be quite diverse, and is dependent on a conglomerate of factors. Some roads travelled are directly under our authority whereas others are powered by elements beyond our control. The ratio between the level of autonomy versus dominance in a life journey is also influenced by many components, with gender, employment, family dynamics, and socioeconomic status being examples. The life course of pets and animals in service are almost completely controlled by humans. This may paradoxically lead them to travel haphazardly through life from one owner to the next, blindly following commands. The beautifully constructed 1966 Robert Bresson film “Au Hasard Balthazar” explores the random yet stifling journey of an innocent donkey with the aforementioned name.

As a young colt, Balthazar is treasured by two young children in the local village with a cute, budding romance named Jacques and Marie. Jacques’ family moves abruptly during his childhood, and their farm is entrusted to Marie’s family, including the care of sweet Balthazar. The film then flash forwards years later, and we begin following the donkey throughout his life course under multiple ownerships. The affection and bond both he and Marie share anchors the film’s trajectory, but the darker aspects of human nature weave through the narrative.

Bresson’s understated style involved the creation of richness in stories through simplicity in the film’s surroundings as well as through acting. It is through this approach that themes of innocence and exploitation emerge, paralleling the lives of Marie and her beloved Balthazar. Both are quite naive about the surrounding world, being manipulated by ignorant and arrogant humans for their own benefit. It is an important reminder that oppression of many creatures, including humans, in seemingly lower positions of power occurs quite regularly. All natural environments and those living within them deserve to be treated with care and respect, and it is an injustice to our true potential as citizens of the Earth when this responsibility is abused. 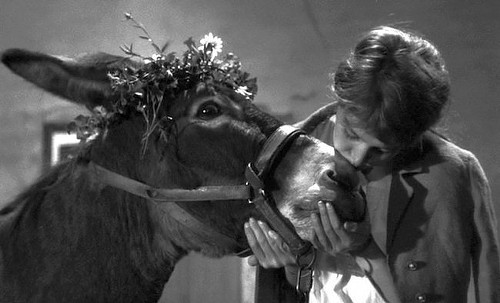