Children have a unique sense of viewing the world which is mostly abandoned by adulthood due to the realities of societal pressures. They see it with wonder and astonishment, blindly obey and follow those they love and respect, but have not yet developed a means for discerning nuances and appreciating the complexity of life. Issues can greatly arise when adults with a childlike mind maintain “black and white thinking”, suddenly being thrust into the planet of adult problems. They may not be equipped to face such matters, and there can be catastrophic consequences. This is one of the central topics explored the stunning 1996 film directed and written by Lars von Trier, “Breaking the Waves”.

Bess McNeill, played by Emily Watson, is a young childlike female living in the Scottish Highlands in the 1970s. She is going to betroth Jan Nyman, an oil rig worker from Scandinavia played by Stellan Skarsgard. Her community of origin lives and dies by a very conservative interpretation of Christianity, one which does not even allow women to speak in church or attend funerals. Bess frequently has conversations with God, and truly believes he is communicating through her. She begins having intercourse after marriage with her husband, which creates a sense of bewilderment for her. While still newlyweds, a work accident on the oil rig paralyzes Jan. Bess does not seem to appreciate the heightened responsibility needed to care for her husband at this time, but a later request by Jan to Bess blurs the lines between religious conviction, love, and sexuality.

This film combines a multitude of elements so beautifully to address its complex and controversial themes. I truly feel that Watson’s portrayal of Bess is one of the best performances on screen to have ever been filmed. She plays Bess with such innocence, confusion, fear, and truth in relation to her environment and to her beliefs. Skarsgard’s performance conveys a stark contrast between hopelessness yet control, which he blends together quite well. The cinematography reflects the bleakness yet realism of the community’s present as well as its future. The classic 1970s music sets the tone for the era, and the unique division of the film into chapters highlights the intricacies and complexities of Jan and Bess’ relationship.

I feel as if the title “Breaking the Waves” can be interpreted as a figure of speech regarding the creation of controversy, the feelings and thoughts which accompany said contention, and the ultimate dissolution or resolution. Bess’ marriage to a less religious individual was an initial change in the tide for the town, but her actions upon Jan’s sexual requests had serious ramifications for her future. It is quite fascinating and heartbreaking to note that the conservative religious boundaries placed on the citizens’ way of life was likely the driving rationale behind all of Bess’ actions in addition to her already fragile cognition. This sense of elitism enforced by various individuals and organizations in the film is an unfortunate universal truth which many, especially women, have faced and must continue to “break the waves” on a daily basis in order to live freely. 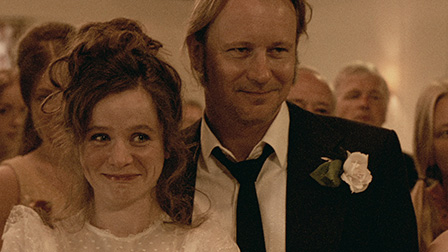